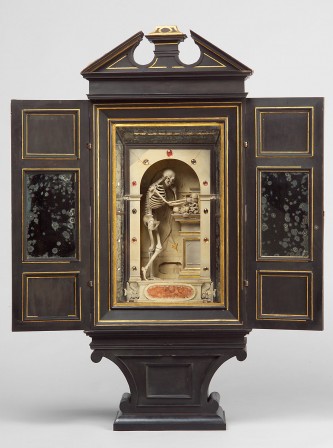 The Tödlein-Schrein (Shrine of Little Death) by Paul Reichel (active 1568 - 1588) contains an accurately worked skeleton executed after the depictions in Andreas Vesalius’ influential work of anatomy De humani corporis fabrica (Basel, 1543). The right hand of the skeleton reaches for one of the apples from the tree of the knowledge of good and evil (Gen 2,9). Between them is represented the serpent who according to the biblical narrative seduced the first human couple to enjoy the forbidden fruit (Gen 3,1-6). An hourglass and a book can be seen on the left; the relief on the back wall shows a bow and arrow, and a coffin. While in the late Middle Ages death was often thought of and depicted as a hunter, reaper or riding skeleton, thus creating an allegory of killing, here the metaphysical mystery of death finds quite a different expression. The biblical account of the expulsion of man from Paradise as God‘s punishment for the disobedience of man, over which he seems to reflect, is staged in a very sober manner; the skeleton, as an anatomically correct relic of a human being, is free from all horrible signs of decay. The bow and arrow may well be understood as the arms of God as a righteous judge (Ps 7: 9-18, “he will bend and string his bow… he makes ready his flaming arrows“ - A.V.).
On the side walls of the altar as well as on the inner surfaces of the doors there are mirrors which directly involve the viewer in the subject matter. 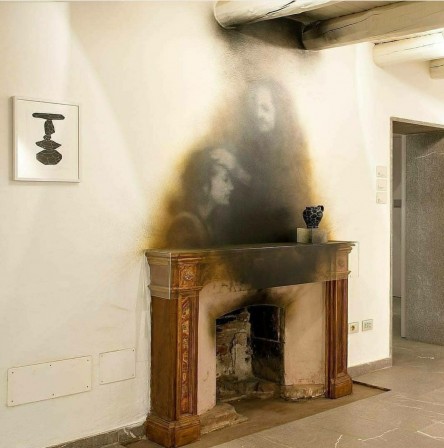